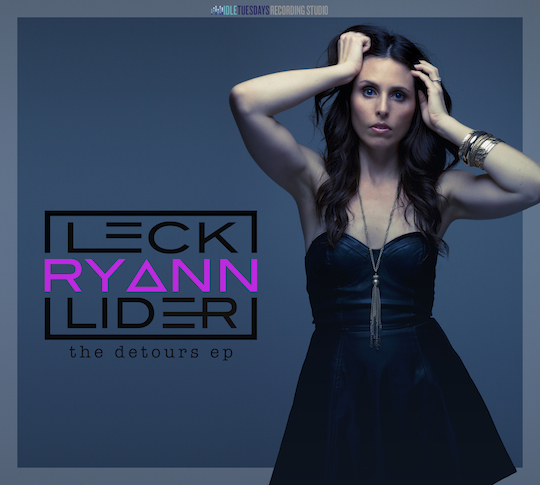 Life experiences can often kick start creativity. Ask any artist you know – writer, designer, photographer, musician, painter- and they will attest that some of their best work emerges as they grapple with life.

Singer-songwriter Ryann Lecklider will give a hearty “Amen!” to that.

Singing has been her passion since childhood, but fears always held her back. Ryann has set aside some of those earlier fears and her longtime dreams of becoming an established singer-songwriter are certainly coming true. She is the newest program artist to be launched by Idle Tuesdays Recording Studio.  After months of preparation and weeks in the recording studio, The Detours EP, with three original songs was released recently at a celebratory launch party at Hemingway’s Lounge in Hollywood.

An avid reader and lover of books, the venue was perfect for her (“the bar is lined with real books you can take off the shelf just like a library”). Nearly 200 people, including her family who came to Tinsel Town from the Midwest, turned out for a pumped up evening of music, food and inspiration.

“It was really cool. There was this huge line out the door. Of course I was nervous, but when we opened the doors and I saw hundreds of my friends and family I immediately relaxed,” she says, “It was so awesome to see such a great turnout.”

And fans were not disappointed. Ryann performed five original songs – three from the EP: Detours, Love Affair, and Revolving Doors – plus covers from Beyoncé and Tory Kelly, all to hearty applause.

“It’s great to see Amy getting out there and more involved in the LA music scene,” she says.

The show was “super fun” and a definite milestone for Ryann, but she isn’t slowing down. Soon after the launch at the Hemingway’s Lounge, she performed an acoustic set at the State Social House on the Sunset Strip with Israel Mejia.  As part of the program, Idle Tuesdays actively seeks venues where Ryann can perform. Ryann’s next show will be July 17 at Room 5 in Los Angeles.

“I am actually still working on new songs. I want to be able to have a whole set of my own original music. I love having my hands in a lot of different areas: writing, performing some covers and getting comfortable in front of an audience,” she says.

The time in between the launch and playing at other venues has also given her some time to reflect on the recording process and her journey thus far.  A definite planner by nature, one of the first things she learned was how to be flexible with a production schedule that was racing against the clock for the release date. The process, she shares was “pretty smooth, but a little stressful for me as a planning person. However, the recording team pulled together beautifully.”

Ryann also experienced much of the technical side of the business, going in having no idea what a recording would be like, but she learned the ins and outs of processes such as photo shoots and albums covers. Being surrounded by professionals who graciously held her hand throughout the process has equipped her to tackle larger projects, such as a full-length album.

But beyond the practical logistics, she also feels the process has helped her grow creatively as an artist.

“It has been a confirmation for me. I have been writing and never really know if people like it or how it will be received. But now it’s like, ‘Wow! People are enjoying this!’ I feel like I can continue to trust my instincts and maybe take more risk the next time around and push myself creatively.”

Planning your album: your CD release (and post-release)
A New Way to do Music